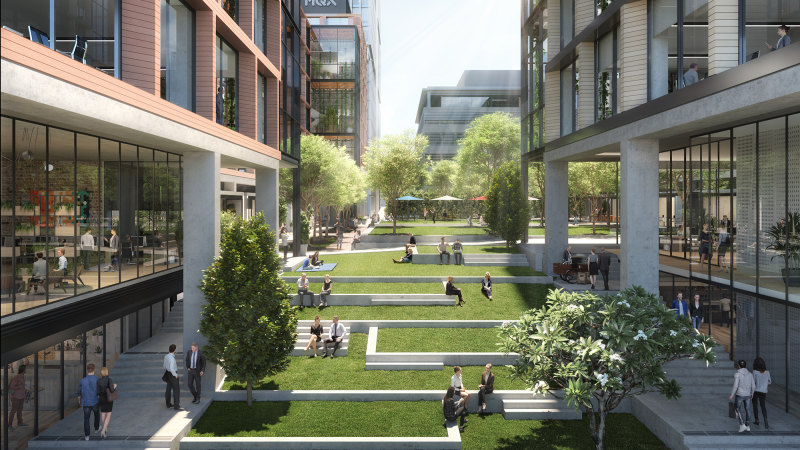 More than 7600 new homes are planned for half of Macquarie Park over the next two decades as part of a blueprint for developing the fast-growing area into an innovation precinct.

Amid concerns about infrastructure already lagging growth, the state government’s draft place strategy for the 350-hectare suburb on Sydney’s north shore highlights the need for about $6.5 billion in spending on transport and other public facilities within the next 15 years.

Under the draft long-term plans, up to 7650 new dwellings would be built in a 170-hectare area of Macquarie Park, including the existing business park and commercial core. Within that parcel of land, seven new neighbourhoods would be delivered in stages over the next two decades, if the plans are realised, to bring “life and activity” – day and night – to the suburb.

The blueprint also spruiks the creation of an extra 20,000 jobs in sectors such as education, health care, advanced manufacturing and telecommunications.

Ryde’s Labor mayor, Jerome Laxale, acknowledged the considerable work in the draft strategy but said he was wary of assurances about new infrastructure, accusing successive governments of failing to live up to promises for new schools and transport.

“If we are going to cram another 7600 homes in, they need to put the infrastructure spending into the budget,” he said. “It is time for the minister to put the money where the mouth is.”

“The infrastructure being built across the Ryde electorate will support the continued growth of Macquarie Park as a health, education and technology jobs precinct,” he said.

Of the $6.5 billion in infrastructure spending deemed as necessary over the next 15 years, the draft plans estimate $4.7 billion would be needed for major transport projects such as a mass transit link between Parramatta and Epping, and several rapid bus corridors.

With it being home to Macquarie University, the area is already the fourth largest employment centre in Greater Sydney, and one of Australia’s largest non-CBD office markets.

The draft strategy details plans for more than 14 hectares of new parks, squares, plazas, cycleways, linear parks and 2.7 hectares of improved open space. Connections to Lane Cove National Park would also be bolstered and tree canopy across the precinct increased.

It also proposes making Macquarie Park more suitable for people to walk by providing a large network of pedestrian routes and reducing private parking availability. At present, about 70 per cent of people who work in Macquarie Park travel there by car.

Planning and Public Spaces Minister Rob Stokes said discussions with the local community and businesses had shaped the proposal to make the area an “economic and employment powerhouse”.