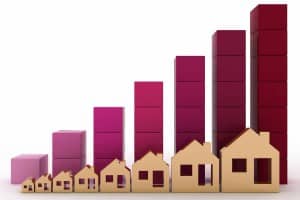 Australian homes are increasing $1990 per week on average this year, despite the housing market starting to lose steam.

Home values jumped another 1.5 per cent in August, bringing the total increase for the first eight months of the year to 18.4 per cent, according to Corelogic.

The increase in prices for 2021 equates to around $100,000 per home, however, in some locations, including Sydney’s northern beaches, the value jumped five times faster.

While the growth rate was still well above the average in August, it was the lowest monthly rise since January, showing the market was moderating after reaching its peak in March.

Change in dwelling price in August 2021

The last time home values increased this fast was in the year ending 1989, where appreciation hit 31 per cent.

CoreLogic research director Tim Lawless said the slowing rate of growth probably has more to do with worsening affordability constraints than ongoing lockdowns.

“Housing prices have risen almost 11 times faster than wages growth over the past year, creating a more significant barrier to entry for those who don’t yet own a home,” Lawless said.

“Lockdowns are having a clear impact on consumer sentiment, however to date the restrictions have resulted in falling advertised listings and, to a lesser extent, fewer home sales, with less impact on price growth momentum.

“It’s likely the ongoing shortage of properties available for purchase is central to the upwards pressure on housing values.”

Huge price growth has made living in some of Australia’s regional cities unobtainable for people renting and earning modest incomes.

The Corelogic hedonic home value index also showed the growth-gap between houses and units was starting to shrink.

Lawless said the convergence of growth in house values and unit values could be another demonstration of affordability becoming more challenging.

“The narrowing gap between house and unit value growth is most noticeable in Australia’s most expensive city, Sydney, where the monthly growth rate for houses was 2 percentage points higher than units in March,” he said.

“That ‘gap’ has now reduced to 0.6 percentage points in August. Based on median values, Sydney units cost almost $470,000 less than a house. At the same time, the growth gap between houses and units in Melbourne and Brisbane has widened.”

Corelogic said Perth and WA had not been included in this index while it investigates a divergence in results.