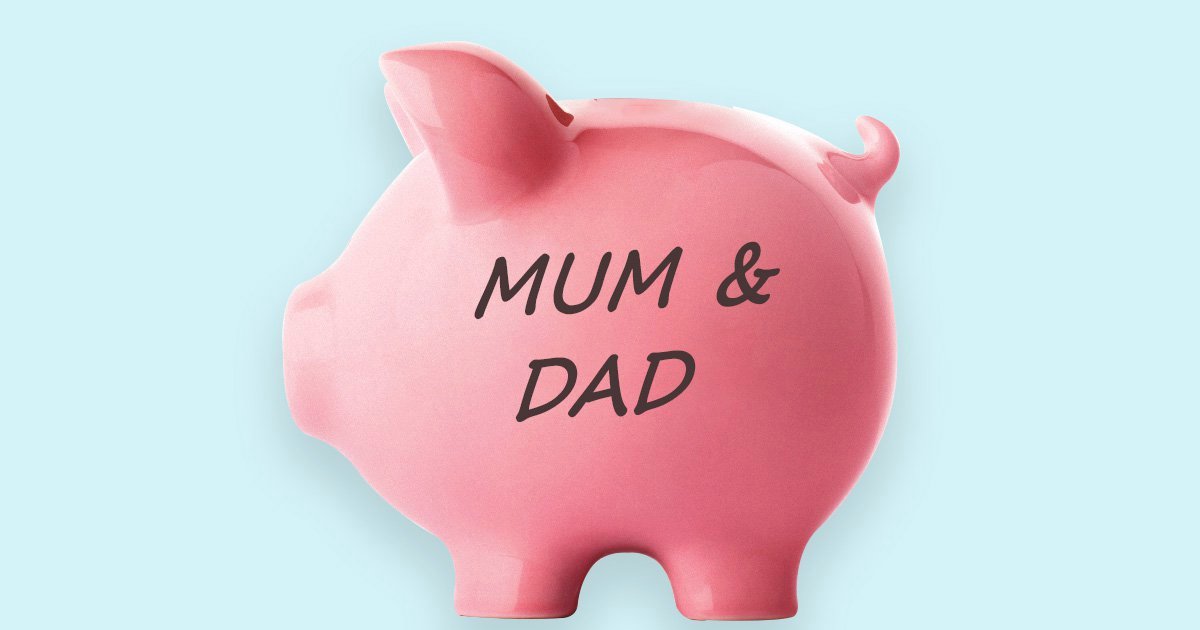 Whether they’re already in retirement, or heading that way, Baby Boomers and some Gen X parents appear to have got a new pastime – playing the property game on behalf of their grown children.

Contributions from the “Bank of Mum and Dad” are up 41 per cent in last two years, with the older generation lending a total of $92 billion in property assistance, according to data from mozo.com.au.

Beyond just the financial support, parents are also literally putting their hand up to help on auction day according to the Real Estate Buyers Agents Association (REBAA).

Finance experts often refer to the “big four” mortgage lenders, but statistics show the fifth biggest lender in Australia is the “Bank of Mum and Dad” – sitting behind ANZ, Commonwealth Bank, NAB and Westpac.

And for many struggling first-home buyers, their parents are offering a deal other lenders can’t match ? 59 per cent of parents don’t expect repayment.

“The property market in Australia is incredibly challenging for younger generations to break into, with property prices surging by 395 per cent in the last 25 years.

For this reason, the Bank of Mum and Dad has become an essential player in our nation’s housing market.

“Loan contributions have grown by 41 per cent in the last two years alone, highlighting that the Bank of Mum and Dad will not be closing shop anytime soon,” said Mozo director, Kirsty Lamont.

Nearly half of parents surveyed by Mozo said they were cutting expenses or delaying retirement in a bid to get their children on the property ladder.

One in four felt at risk of financial hardship in the face of their contribution and 26 per cent of those who acted as guarantors reported their child defaulted on the loan.

Parents under the hammer

REBAA president, Cate Bakos, said there were an increasing number of parents making the auction rounds across the nation’s capitals.

“Certainly in Melbourne we’re seeing a dominant presence of parents who are bidding on their children’s behalf, many of whom are quite competitive especially when there are two or three dads fighting it out,” she said.

“The problems arise when dads start bidding out of competitive spirit more than strategic support, securing properties where a valuer may query if the Loan to Value Ratio is precariously high,” Ms Bakos, a buyer’s agent with Cate Bakos Property, explained.

How long solo first-home buyers need to save for deposit

She said government incentives were encouraging more first-home buyers into the market, but those who are benefiting from the Bank of Mum and Dad are further shaking things up for their opposition on auction day.

“We see parents assisting their children on a regular basis, from moral support at opens and auctions, to financial contributions. Whatever the method that works for each family, there are certainly many first-home buyers who have the added advantage of some turbo-boost to their budget,” she said.

Ms Bakos and her husband Ian are living proof of such parental support. The pair gave her stepson a head start into property by putting up a 10 per cent deposit and handing over the keys to a house in Melbourne’s Altona.

“Our motivation was to help get him onto the ladder in a fast-growing area, target a capital growth strategy so that he could then springboard into home ownership with a hearty deposit thanks to the equity gain,” she said.

Rob Bakos said he was shocked, but grateful for the a birthday gift that will keep on giving.

“For my 21st birthday they told me they’d bought me a property, they were going to put it in my name and I was to never ever sell it, but pretty much only use it for its equity.

“They also made it clear that I’d be responsible for fixing anything if something went wrong with it and do all the renovations,” he said.

“At the time I was an apprentice carpenter and wasn’t making very much money. I had wanted to follow in their footsteps and get a property, but it’s hard when you’re barely making $18 an hour,” he said, adding that if he hadn’t had the parental assistance he would still be saving for that deposit almost five years later.

Mr Bakos said his investment property had now acquired enough equity for him to seriously think about buying another property.

“My advice to anyone else in their 20s looking to buy real estate is to invest first. I’ve learnt a lot from what Catherine and my dad have taught me, investing in property is the way to go,” he said.

“I consider myself very lucky and I don’t take it for granted at all,” he said.

Keeping it in the family

Mozo’s data shows that the portion of parents helping their children to buy a home has remained steady between 2017 to 2019, sitting at 29 per cent, however due to an expanding population, the number of parents contributing jumped from 1.02 million in 2017 to 1.2 million in 2019.

Letting adult children live at home rent free remains the most popular way to assist children; with 43 per cent of parents using this as a means of assistance, while 32 per cent provided money for a deposit.

Other forms of assistance included acting as a guarantor (14 per cent), assisting with repayments (10 per cent), purchasing a property on behalf of their children (9 per cent) or buying a property as a partner (6 per cent).