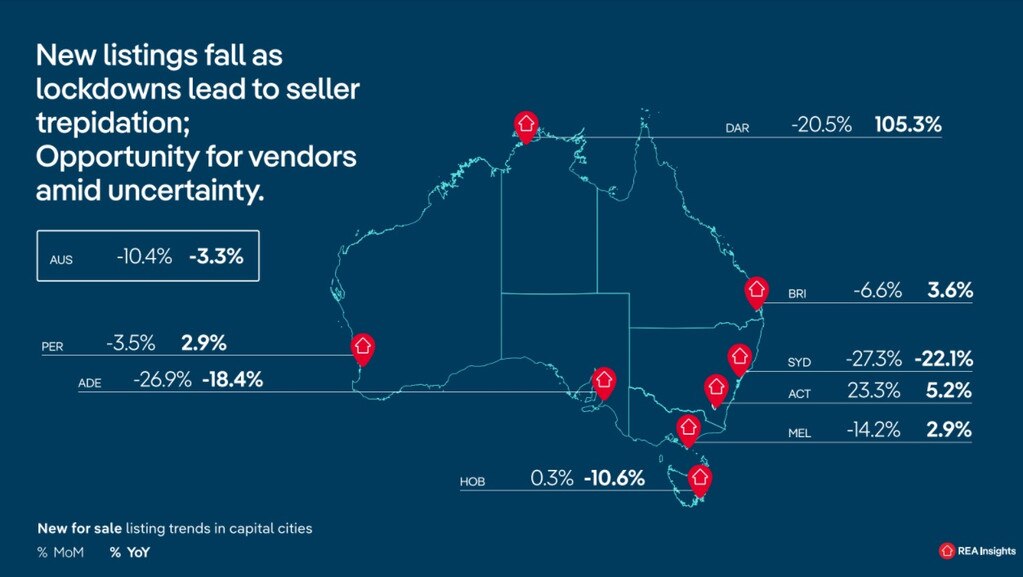 Opportunity knocks for brave vendors who are willing to list their homes amid mass lockdowns, according to new research revealing sellers were spooked in July.

The latest REA Insights report out Friday demonstrates that the wave of restrictions introduced in late June – which initially saw almost 12 million Australians locked down — had an immediate impact on the property market.

However in the ACT, where restrictions hadn’t kicked in during July, listings jumped 23.3 per cent.

“The surprising thing about this data is just how much of an impact lockdowns have had on confidence, especially considering we’ve been through this a few times before,” said Cameron Kusher, author of the report and REA’s director of economic research.

“It’s particularly hit hard in a market like Melbourne where you can’t have one-on-one inspections anymore, so it’s probably not a surprise to see things pull back there.

“But I guess it shows that while the market is really strong, there’s a little bit of caution around at the moment.

“As soon as people feel like it’s going to be more difficult to sell their property, they’re going to be less inclined to put it on the market.” he said.

Where there are signs of opportunity for vendors, according to Mr Kusher, is in the property portal’s search data.

While the latest lockdowns have hit supply hard as sellers sit on their hands, national search demand on realestate.com.au was at near-historic highs throughout July and heading into August.

“Vendors are seemingly quite reluctant to list their properties, but we still know that demand is very high,” he said.

“So, if someone is willing to bite the bullet and put their property on the market they might actually find it’s quite successful just because there’s not much stock on the market.”

“It’s going be a bit different everywhere. So in Brisbane, Adelaide and Perth there’s probably no reason for any real damage to the spring selling season, but depending on how long the Melbourne lockdown goes on there might be a bit of a late start to spring sales.

“For Sydney, at the moment I guess it’s a case of all bets are off. I wouldn’t think we’d see much of an increase in listings in Sydney until lockdowns are over, whenever that might be.”

However savvy sellers might want to time the market to avoid drowning in competition when lockdowns are lifted.

“As we have seen over the past 18 months, the property market responds to restrictions being eased almost immediately. Based on the market behaviour following previous lockdowns, we would expect once current lockdown restrictions end, there should be a rapid rebound in the volume of new listings coming to market,” Mr Kusher added.

The REA Insights Report for July breaks down where new listings are increasing and decreasing across the country.

Although Sydney experienced the largest drop in listings recorded since national lockdowns commenced in April 2020, this dramatic lack of stock is not being felt across every suburb.

For Freshwater in Sydney’s Northern Beaches, new listings actually increased by 63 per cent followed by Wamberal on the Central Coast which was up 55 per cent and the nearby township of The Entrance at 50 per cent.

“In welcome news for buyers circling the eastern suburbs, new listings have fallen the least year-on-year in the region. However, supply remains tight and listings remain low,” Mr Kusher said.

There has been less choice for buyers around the north western suburbs.

“Sellers in Ryde currently face reduced competition, as the region had the fewest new listings in July of any Sydney SA4 region and the largest year-on-year decline. This indicates that buyers in the area have limited choice,” he said.

The biggest year-on-year decreases in Sydney’s listings numbers occurred in Thirlmere in the city’s far south west with a drop of 68 per cent, in West Ryde and Northmead where they fell 64 per cent.

The report suggested that vendors in the north east of Melbourne could take advantage of a quieter market, with the region recording the largest year-on-year decline in new listings for July of any SA4 region with a 20.5 per cent fall.

Conversely, purchasers have more options closer to the city.

“Buyers in the inner east currently enjoy more choice, with the region the only in Melbourne where new listings increased our the past year, up 1.8 per cent. The overall supply of stock, however, remains low,” Mr Kusher said.

The biggest increase in new listings occurred in Melbourne’s north in Glenroy with a whopping 137 per cent hike, followed bay Roxburgh Park with a jump of 123 per cent and Broadmeadows with a 118 per cent rise.

Listings dropped significantly in Mount Martha on the Mornington Peninsula with a year-on-year fall of 67 per cent, in Wollert in Melbourne’s semirural north at 58 per cent and Keilor East which was down 52 per cent.

With a much smaller decline in new listings, the Queensland capital is home to more confident vendors, but REA’s Insight report still showed the total number of properties listed for sale in Brisbane during July was the fewest on record.

Where sellers seemed to have taken a step back – and where a window might be opening up for vendors according to Mr Kusher’s report — was in Moreton Bay North where the region recorded a 15.3 per cent reduction in new listings, the largest year-on-year decline in Brisbane.

More options are on the table for buyers west of the city.

“Buyers in Brisbane-West will be relieved to see some new stock hitting the market as the city’s only region in which new listings are higher year on year, up 7.5 per cent,” Mr Kusher said.

The biggest increase in new listings came north of Brisbane in Petrie with a 127 per cent jump followed by suburbs in the city’s south west like Bellbird Park where listings rose by 120 per cent and in Redbank Plains at 107 per cent.

Alternatively in Brisbane’s south, Oxley and Tarrangindi both saw new listings drop by 54 per cent, while in New Farm they fell by 49 per cent.