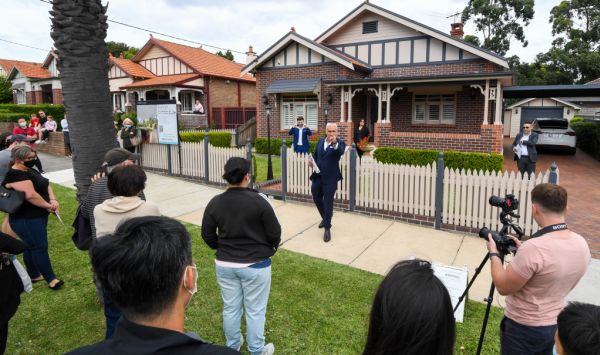 The property market is starting to return to a more normal level, with preliminary auction clearance rates edging lower on the weekend.

At the height of the pandemic-driven property boom, the majority of homes were selling under the hammer for well above reserves, as buyers fought it out for the limited stock on the market.

But those heady days appear all but over, with major capital city clearance rates falling further below 70 per cent and into balanced territory, while anything below 60 per cent correlated to price falls.

Sydney’s preliminary clearance rate on Saturday dropped to 66 per cent, down from 78 per cent four weekends ago, according to Domain data.

Melbourne’s clearance rate also dropped to 66 per cent, down from 70 per cent a month ago.

Domain’s chief of research and economics, Dr Nicola Powell, said conditions have improved for buyers as they have more to choose from.

“Clearance rates are definitely showing we’re edging into a normal or more even playing ground when you pair that with an influx of listings. The market is normalising from those crazy conditions of last year,” Dr Powell said.

“Anything above 60 per cent will see house price growth. They [clearance rates] are edging lower and closer to 60 per cent, and it’s at the break even point. Once it gets below 60 per cent, prices – on a broad level – start to fall.”

Dr Powell said while both markets had more volatility week to week due to significantly lower auction volumes, Brisbane’s falling auction clearance rate has been compounded by the recent floods.

Increasing conjecture around potential rate hikes, global uncertainty and the sheer increase in listings has left Sydney buyers more cautious on auction floors across the city, according to Damien Cooley, auctioneer and managing director of Cooley Auctions.

“Fear of missing out has left the market,” Mr Cooley said. “Buyers are a bit more measured in the way they bid … and are surprised by what they’re getting it for. They’re paying less for it [than they expected].”

As a result, more homes are selling prior to auction because there are fewer buyers on each property, he said.

But vendors taking their property to auction are beginning to readjust their expectations to the new normal, with the average price over reserve reaching $60,000, based on auctions the company called over the weekend.

“That’s an indication that vendors are a little bit more realistic about their reserves and are willing to meet the market,” Mr Cooley said. “In February, the average price over reserve was -$23,000. That tells me more properties were selling under reserves, vendors’ expectations were high and buyers weren’t willing to pay those expectations.

“There is a trend towards returning to a more normal marketplace,” he said, but added that sellers were still fetching prices that were higher than a year ago.

Melbourne’s property market was also going through a “transition period”, according to Mike McCarthy, Barry Plant’s executive director, who said vendors needed to understand there is a more even keel of supply and demand compared to last year.

“It’s a normal auction market. That’s where we’re landing right now and where I suspect we’ll be for the rest of the year,” he said.

“Vendors need to look closely at what is happening in that market right now, not what happened three or four months ago. It’s outdated.

“You’ve got to be careful about looking at the result from around the corner from a month ago. It may be you just happened to have two or three buyers who love the property and pushed the price up.”

He said the pressure had come off buyers to purchase property, with more choice in the market.

“They’re seeing a more balanced state of competition, and that means the pressure is not there to pay over the odds. So there is much more opportunity for buyers.”